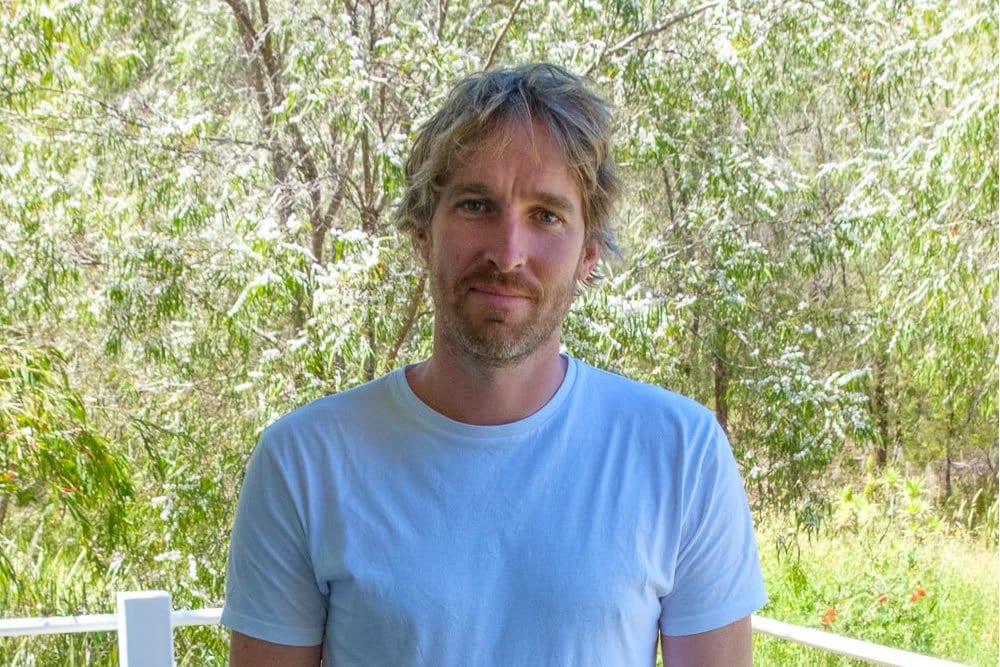 I sat with Darren in the lead-up to last year’s Margaret River Gourmet Escape, where we chatted about his views on fame and whether he would be returning to TV…

UK-born Darren Robertson moved to Australia in 2001 and worked with Tetsuya Wakuda for eight years, including three as Head Chef. In 2010 he started the Table Sessions, a “guerilla dining” organisation that ran pop-up dinners, and was one of the founding members of the Taste of Young Sydney (TOYS), which celebrated experimentation and collaboration in the kitchen and won the Innovation Award in the SMH Good Food Guide 2010.

In 2011 Darren joined a group of friends to open Three Blue Ducks in Bronte, a beachside suburb of Sydney. That empire has continued to grow, and now includes a restaurant on an 80-acre farm in Byron Bay and an inner-city restaurant in Rosebery.

Engaged to meteorologist and TV presenter Magdalena Roze, Darren is a regular at food events around the world, has written two cookbooks and is an ambassador for Cancer Council and OzHarvest. His Australian TV credits include co-host of Channel 10’s “Recipe to Riches” and more recently his own show on Lifestyle FOOD, “Charcoal Kitchen”.

I sat with Darren in the lead-up to last year’s Margaret River Gourmet Escape, where we chatted about his views on fame, and whether he would be returning to TV…

Welcome back for your third Margaret River Gourmet Escape.

We didn’t do it last year because we were pregnant. We did the Feast in the Forest with Matt Wilkinson a couple of years ago which was hilarious. This year I’m doing one with Nelly Robinson, which will be interesting because our food is polar opposites.  Then they’ve got me on stage with David Thompson. I’m terrified, because he’s a genius.

We’re based in Byron now, and there are so many similarities with Margaret River. There’s something that draws people here. I’m not sure what it is, but there’s a different tempo here to the city. We go to Sydney a lot, and when we go back to Byron it’s kind of like this.

This year’s line-up is less focused on household names, except Nigella Lawson of course.

That’s the irony sometimes, the guys that are the most established in my world no-one would even recognise. It’s changed now because he’s been on the cover of Time magazine, but Alex Atala is not a household name. My Mum probably hasn’t heard of Alex Atala, but to me he’s like a god. He could probably walk down the street and no-one would bat an eyelid.

Do you get recognised?

It depends on where you go. If you’re at a food festival then it’s an established crowd and you’ll get a bit of attention. If you’re at the restaurant, everyone assumes they know you. I think in Australia we’re a bit more respectful of people’s space. I did a show in Indonesia last year with MasterChef judge Rinrin Marinka, and it was like there were no boundaries at all. We would go anywhere, we could be eating, and it was  – whoom – selfies!

Mags gets recognised occasionally because she’s done a bit of TV and she’s absolutely mortified. She gets so embarrassed. It’s nice being a little bit anonymous, to be known within the community for what you do, and that’s enough. I think celebrity is an interesting thing, it’s evolved into a weird monster.

Will you be doing any more TV?

In saying that, I might be. Because I really like it, and it’s a very powerful medium. You do get given a voice, and maybe some influence to inspire people or make small changes in our industry – not going all Che Guevara. And it’s good for the business. People like to see you on the barbecue or in the kitchen. I’m not saying we’re on the line every day, but we’re certainly active in our business rather than out playing golf.

How do you manage that?

It’s tricky. I remember Tetsuya Wakuda saying to me “one of the things I regret the most is actually calling my restaurant my name, because there’s this expectation that it’s Tetsuya Wakuda”. It stuck with me. I love the fact that the Ducks is the brand, it’s the name, we’re behind it – it’s collaboration. That being said, people still want to see you around so it is a bit of a balance. Now that I’ve got a kid, I’m not going to be doing 80-hour weeks.

How has social media changed things?

I’ve been toying around doing some bits and pieces with my partner Mags. I listen to a lot of podcasts and it’s interesting to see where different opportunities in our industry are unfolding. I remember sitting next to a professional Instagrammer from Singapore who made 15 second films in restaurants. Three years ago that never existed. Who’s to say he’s not as passionate about food as I am at cooking? It happened in fashion as well, the bloggers are like royalty. Twitter is old-school now, but it changed the game.

Whatever you do, the cream always rises to the top. If you’ve been doing it for years and you’re making a living out of it then you must be doing something right.

Darren Robertson joins the team of Channel 7’s My Kitchen Rules at 7:30pm on Wednesday, February 22.