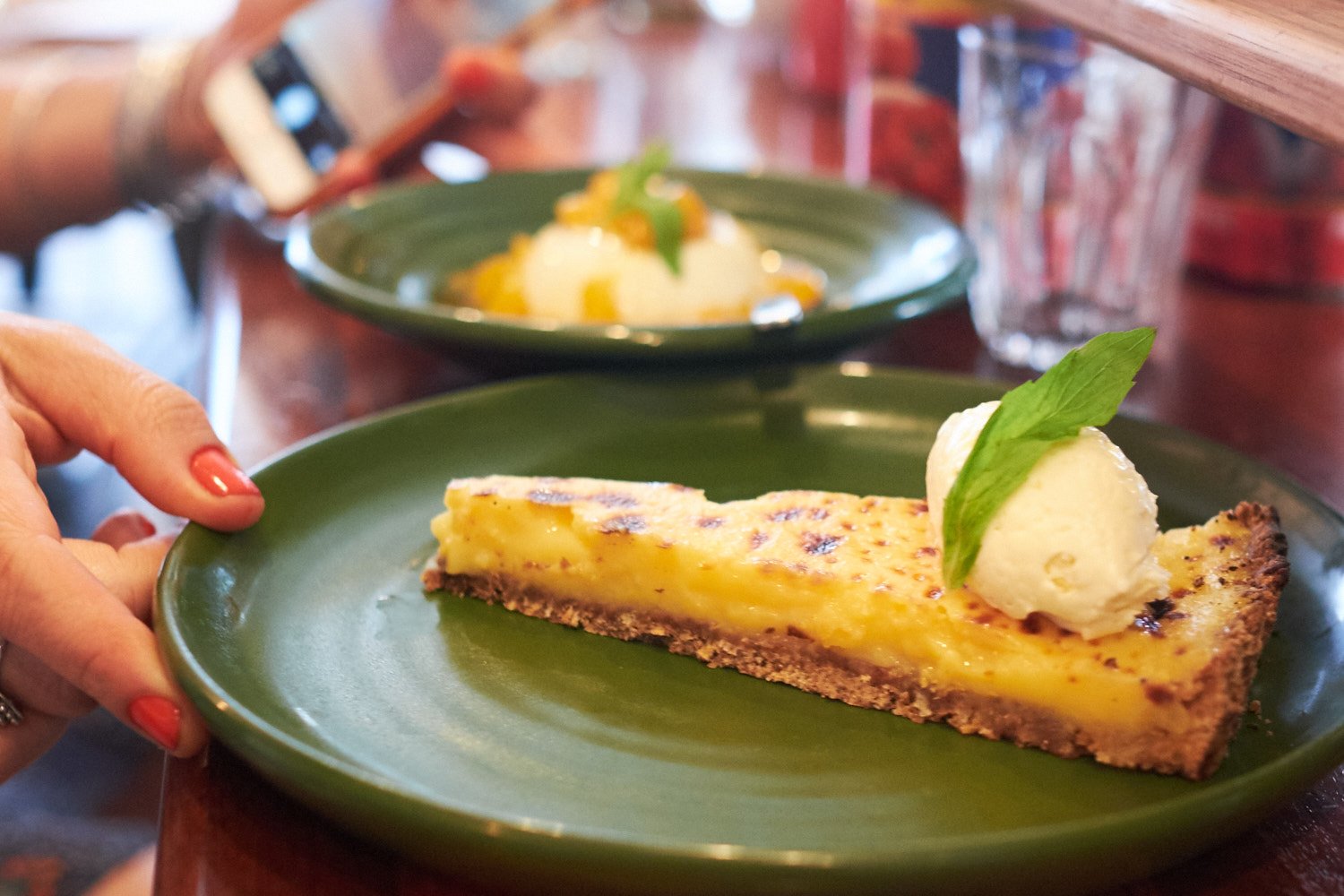 Our visit was in late November last year on the Saturday morning of the Margaret River Gourmet Escape weekend. We arrived at the advertised opening time of 7:30, and so had plenty of others, so there was quite a queue but thankfully the staff were prepared and things moved quickly.

A little surprisingly, many of the people in the queue were at the beach surfing / partaking in other healthy beach-related activities. It’s quite disconcerting to hear a group of guys talking about yoga while you’re queuing for breakfast, especially before you’ve had a coffee.

By the time we sat down to eat, the cafe was well and truly inundated with visiting foodies (damn tourists!)

There is some inside seating – it’s a surprisingly large cafe – but most of the seats & tables are outside, and with a view like this why would you want to be anywhere else? It was a little breezy but you can’t have everything.

As you can see, the view over Gnarabup Bay is simply magnificent.

Food is brought to your table, however you have to collect your coffee from a window on the left side of the cafe which is a bit odd but there you go. You get one of those handy electronic buzzers to tell you when it’s ready, which was a good thing on this busy morning as it took a little while.

I was in serious need of a good coffee – to fight both the breeze and mild sleep deprivation – and thankfully I wasn’t disappointed. Given the sheer volume of coffees they were producing, this was quite an impressive effort.

Renay chose the brekkie burger ($14) – toasted brioche bun with crispy bacon, egg, Swiss cheese, garlic aioli & smoked tomato relish. This was as good as it looked, decadent and delicious. The brioche in particular was of excellent quality, and the melty swiss cheese added flavour and texture you don’t normally get in a bacon & egg burger. There’s also a vegetarian version that substitutes the bacon with avocado (also $14).

It looked quite spectacular on the plate, but unfortunately didn’t deliver the “wow” moment I was hoping for. The poppy seeds are the obvious element of controversy – they didn’t really detract from the dish but they didn’t add anything either, apart from the need for a toothpick.

The dots of curd provided small but effective pockets of flavour, the French toast – being made from the same brioche as the burger – was very good, however I couldn’t taste any mint in the meringue and was left wondering if there is a comma missing from the menu. Hmm.

As you can see, the view at the White Elephant Beach Cafe is horrible – in all seriousness, this must be one of the picturesque places to eat breakfast in Western Australia.

We really enjoyed our breakfast, and will definitely be going back the next time we are in Margaret River. It’s the kind of place that could serve average fare and trade purely on its location, but they’ve made the effort to serve decent coffee and produce a menu with some interesting items, as well as favourites that will please anyone. In saying that, I probably wouldn’t return for the food alone but as a dining experience it’s pretty spectacular. Recommended.