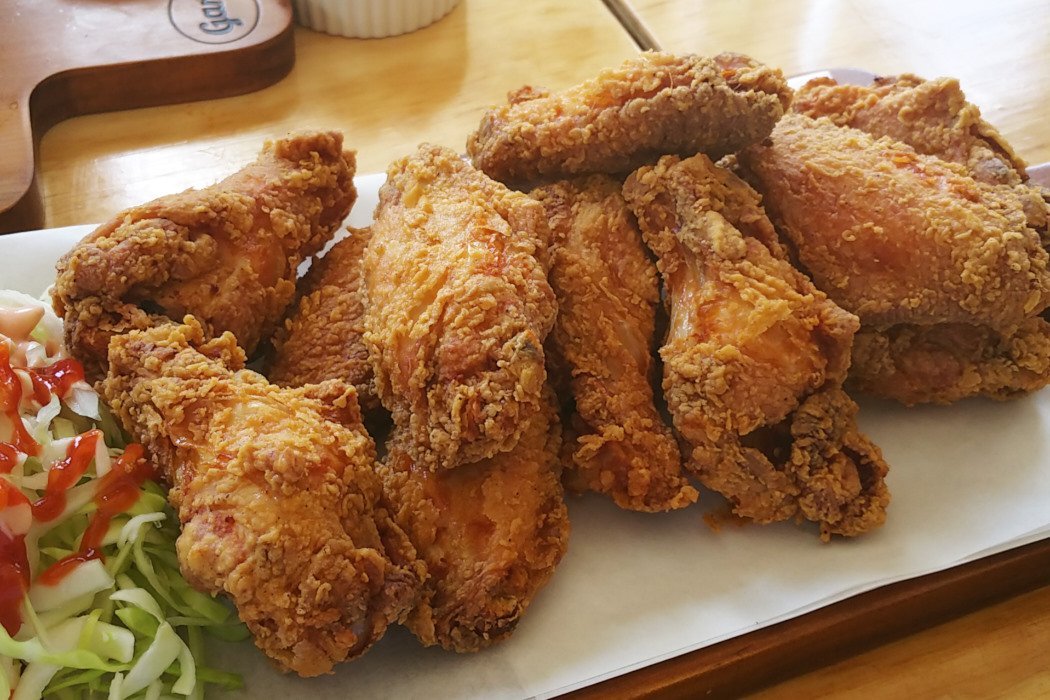 Regular readers will know that I’ve been exploring the area around Shafto Lane just out of the Perth CBD for lunch over the last few months, and I was intrigued to see an under-construction venue finally launched as the curiously named Gami Chicken & Beer.

This wasn’t a brand I was familiar with – and I’m not used to food being described as “gammy” – so I looked it up and became rather excited, seeing it featured in lists of Melbourne’s best fried chicken and Korean food.

The first time we walked past it was rather busy inside and grabbed a menu to examine later, but were also lucky enough to be handed a free sample – a little box containing two pieces of moist, boneless chicken, which did its job as we were very keen to go back for the full experience.

Gami Chicken & Beer is open for lunch Monday to Friday from 11am to 2:30pm, and for dinner seven days a week from 5pm. It does seem to get rather busy at lunchtimes, so I would suggest going early if you don’t want to wait for a table.

Here’s the lunch menu. A full chicken at $32 seemed a bit full on for two, until I remembered that I pay $14 for nachos from Zambrero, and $20-ish for burgers from quite a few places around. Andrew and I decided to share some chicken wings & spare ribs for our first visit, and avoided the temptation to order most of the sides. I’ve seen a photo of the “corn cheese” and it looks as good as it sounds…

Chicken spare ribs ($12 with salad). Hotter than the surface of the sun. Take your asbestos gloves (or don’t be in a hurry).

We both preferred the ribs to the wings, but only because they were slightly easier to eat…although I think I’m missing the point – this was the best fried chicken I’VE EVER EATEN. Moist, crunchy, and totally not greasy. It’s not heavily spiced, either – flavour can be added with your choice of dipping sauce ($1 each). Andrew chose the “sweet soy garlic” while I predictably went for the ambiguous “spicy”. Both sauces were really nice, my “spicy” had plenty of kick but wasn’t over the top. Even the salad was good, and a much welcome relief every few mouthfuls of fried goodness.

Chicken wings (12 for $14, also with salad). Hotter than the ribs. Similar amount of meat, more bones, but not much in it really.

You don’t realise how truly horrific most fried chicken (and in particular KFC) is until you eat something like this. Believe it or not, I still have a relatively sensitive stomach when it comes to eating fatty foods, and consuming a surprisingly large amount of this chicken didn’t upset me one bit. I’m under no illusions that this was a “healthy” lunch (hey, it came with salad!) but I don’t think it was as bad as I first thought. Or maybe it was. Oh well.

I could eat here every day, but I won’t…purely for health reasons. If you even remotely like fried chicken, you must visit Gami Chicken & Beer.

UPDATE!
I went back to Gami for lunch today with some work colleagues, and we tried these three dishes:

Spicy chicken ($15.50) – chicken fillets & vegetables (mostly onions) in “spicy sauces” on a sizzling plate. This was my dish and I absolutely loved it – it had a serious chilli kick! I will definitely be having this again.